This year’s Filipino Reader Conference was held in De La Salle University. I’ve never been inside the campus. The massive Henry Sy Hall reminded me a bit of Singapore’s National Library.

We weren’t able to leave early enough to catch the Conference opening and the first few panels. I’m not on any panels this year; it felt good to just attend the event as an audience member. (For one thing, I was late but didn’t have conniptions.) 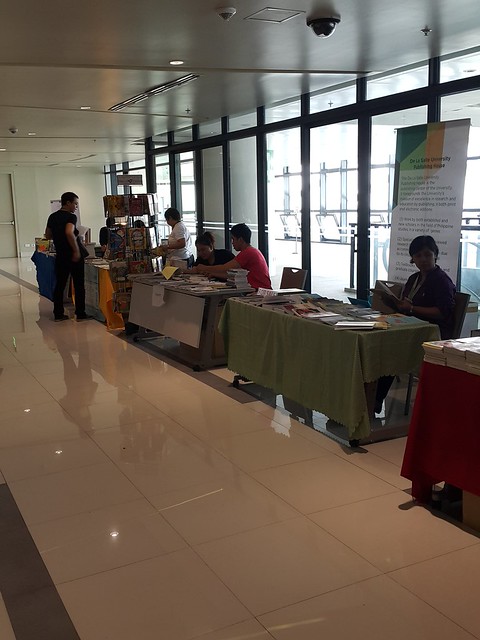 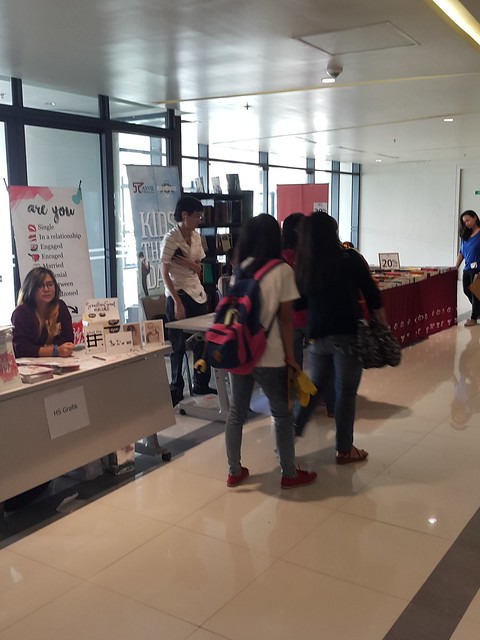 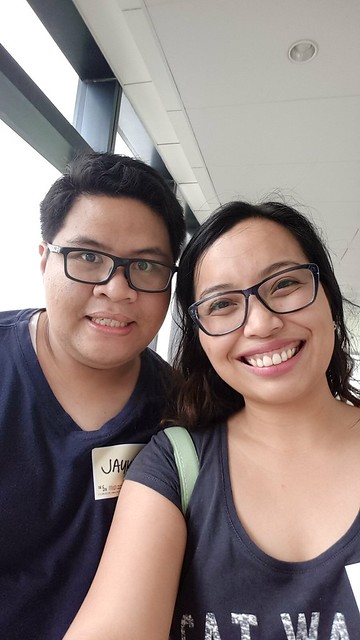 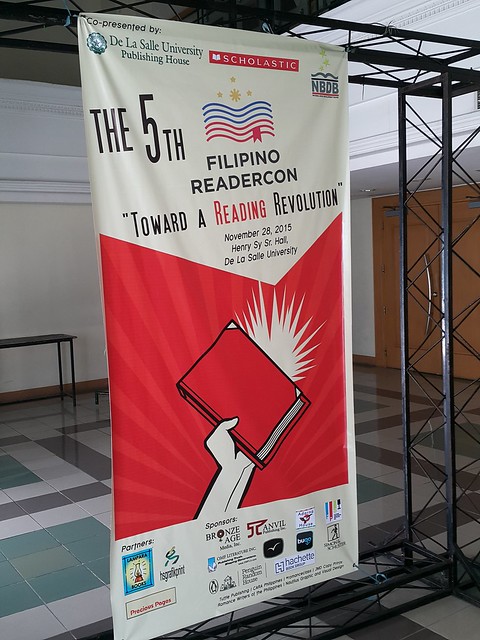 We attended the “Supporting the Authors You Love” panel, facilitated by Paolo Chikiamco.

“Supporting the Authors You Love”
It’s tough to make a living from being an author, but many authors have untapped allies in their struggles – their readers. While it’s harder for an author to stand out in this day and age, it is also easier than ever for readers to take a more direct hand in supporting authors. The voices of readers have more sway than ever before. This panel is for readers who want to exercise this power wisely, in supporting authors, both as individuals, and by championing pro-author issues. The panel will also include a response from readers, who will speak with regard to what authors (and publishers) can do to help readers help them. 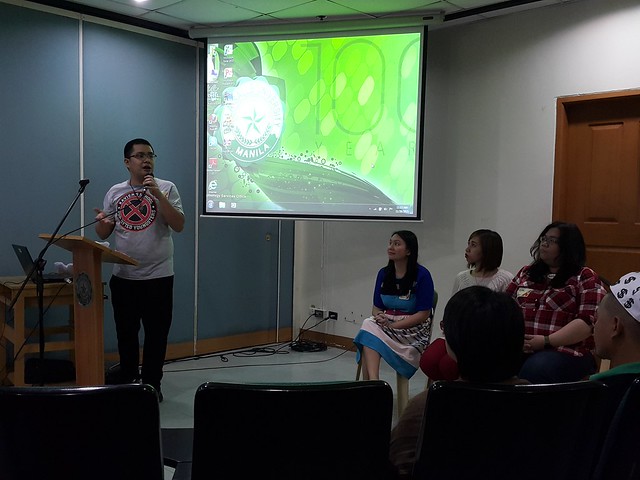 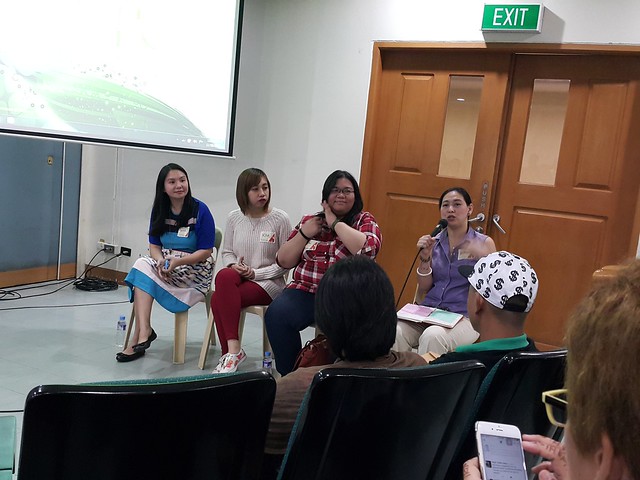 What can readers do? Personally, just sharing my website link and mentioning my books to friends (with or without a review) already means a lot. There are a lot of books out there; it’s easy to get buried (or be pushed into a dark unseen shelf) and fall into obscurity. A book sometimes does not get sold not because it’s bad, but because LITERALLY no one knows it exists. So if a reader acknowledges that my book exists, that’s already a big deal.

We also attended “Live Reading with Gio Gahol and Rachel Coates hosted by #romanceclass”. This is a live reading of excerpts from local romance novellas, which sparked a discussion between J and I.

We were trying to figure out why I don’t read as much romance novels as the average attendee in that activity. (Most of the audience members were female.) I told him that most of the romance tropes do nothing for me, most of the time: the lingering looks, the blow-by-blow description of the kiss, the description of the physical male form that caters to an ideal, which is not necessarily my ideal. This may be an effect of my fierce need to protect the personal, as in, Well, that’s nice, but you don’t need to tell me that.

I told J that I probably just demand other things from the romance stories I read. I’m thinking: I didn’t have a high school sweetheart. Or a college sweetheart. (J and I met when we were both already working.) I was a cynical and pragmatic teen, and still probably a cynical and pragmatic adult, so most romance stories to me seem staged. Un-honest. (In case it’s not clear – and before I get hate mail – this is not a criticism of romance and romance writers. This is an exploration of why most novels in the genre does not work for me.) What works for me: humor. Humor, for some reason, always seems honest to me. Or rather, I don’t need to worry about authenticity in something that is funny, so I can relax and just enjoy the story instead of demanding more from it.

We also asked, Is romance a luxury? Most of the stories read had middle-class protagonists. We realized that most of our local romance stories have at least one upper- to middle-class character; either they’re both middle-class or one belongs to a lower class to heighten the dramatic possibilities. If you write a romantic story with poor characters, will that still be labeled “romance”? They will be faced with problems different from the problems faced by middle-class protagonists like where to go get coffee, or what to do about the snotty wedding planner, or what hotel to book for that vacation abroad, or which gym to go to. Without recognizable romance tropes, that story will be labeled “drama”. What if the protagonists live in a war zone? “Drama”. Romance is airy; romance is not cash-strapped. It requires a light hand that can push away the concerns of the world, so the individual can focus on variations of this single question: does he/she love me back? In some scenarios, this question is the least important question to ask. So, is romance/romantic love a luxury?

I’m sure there are more arguments for or against this claim, but for now, moving on!

UPDATE! Following is a(n accidental Facebook) conversation between me, J and Mina Esguerra.

“If you write a romantic story with poor characters, will that still be labeled “romance”? They will be faced with problems different from the problems faced by middle-class protagonists like where to go get coffee, or what to do about the snotty wedding planner, or what hotel to book for that vacation abroad, or which gym to go to.”

Yes, as these are tropes found specifically in contemporary romance featuring middle class characters, but not in, say, paranormal romance or historical American Western, or historical Regency, or Precious Hearts in some cases, but those have their own tropes as well.

“Romance is airy; romance is not cash-strapped. It requires a light hand that can push away the concerns of the world, so the individual can focus on variations of this single question: does he/she love me back? In some scenarios, this question is the least important question to ask.”

This is, sadly, the generalization of romance that I get most often. (I can say that any reader of romance will say it’s not all airy, that people in romance are also poor, but I’ll step back from that because it’s exhausting.) The thing with romance genre books though is that it pre-supposes that the reader finds this a valid question. Those who don’t, will not read the book. As I do, when I encounter books or entire genres that do not resonate at all. The questions they pose there I understand are important to them though.

“So, is romance/romantic love a luxury?”

Yes — as much a luxury as fantasy, poetry, crime fiction, horror, any fiction is to me. Is there a way to discuss this without inadvertently shaming women for wanting read about love and acknowledging desires? (It’s an actual question! I don’t want to go there. I like discussing romance in a shame-free way.)

Me: Thanks for answering Mina! And yes I have to acknowledge we were discussing contemporary romance. Sumakit ulo namin ni Jaykie while discussing this, we should’ve roped you in. Idea for a panel? Hehehe.

I think where we left off is trying to determine what is considered Romance and what isn’t. I mean, I like Charlie Kaufman movies and I certainly think there’s romantic elements to them, but I don’t think they get categorized as Romance really? Except Eternal Sunshine, but maybe not even that.

Mina: As far as publisher guidelines are concerned, it has to be romance as the A plot, ie main conflict is a threat to the romance, and the climax is a resolution to the romance. Diana Gabaldon’s Outlander books, for example, despite having a lot of romantic elements, do not climax in romance resolution so they are not romance novels, and the author herself won’t call them that. Nicholas Sparks novels, same thing, as those normally resolve the romance and climax at something else (like death). There are structural elements also and beats that have to be met. Many Wattpad to print stories for example are not strictly romances, structurally.

Mina: Chick lit will for example resolve the main character’s dramatic arc often independent of the romance, ie a promotion, validation at work, winning something, so they’re not strictly romances either despite a romance element present.

Mina: Oh and there’s also the romantic suspense subgenre where there’s usually a threat to their lives and the characters are in conflict situations/actual peril, but romance still main plot

Me: Nito ko lang na-gets ang difference ng Chick Lit at Romance! (Some people lump them together, which confuses me!) Salamat!

J: Oh so follow-up question, the resolution could be anything that addresses the indefinite status of the relationship, right? So if the ending is that they decide not to be together it’s still ok?

Mina: Oh but happily ever after is actually a requirement (for many romance publishers) and they won’t accept a submission without it. There’s a debate on this because self publishing, so authors can do what they want and some aren’t ending their stories happily anymore. But then the debate is, what’s the point of this 150 page journey if the answer is no? Did you pull a bait and switch on the reader who had very solid expectations of what they were paying for? The compromise is the “happy for now” which is a decision to stay in a loving monogamous relationship but isn’t a proposal or a wedding

Mina: Eliza – That took me a while din! and I was already writing the books when I figured it out huhu

Mina: Thank you for asking! I like talking about this. grin emoticon The formula and rules naman are being tested a lot and I read the books that are testing it, but hit or miss. I usually don’t enjoy them as much especially if they sacrifice romance for whatever other agenda.

J: Your responses really add some much needed context for me Mina so thanks! Your expertise is very much appreciated. Another follow-up! Are happy endings more a prerequisite of written work, or does it apply to other forms of Romance media? I ask because I think of a number of films that don’t necessarily have happy endings (not even the “happy for now” variety), but I think would still tend to be categorized as romance. An example for me would be Once, which has a romance A plot, and I think does follow the Romance beats consistently (if somewhat more muted), but doesn’t end with a relationship for the two main characters.

In fact I feel like a lot of romantic films written by males tend to follow suit–somewhat more muted expressions of love, coupled with not-necessarily-happy endings. I think I’d place Being John Malkovich under that category, and Woody Allen films also.

Mina:  I haven’t seen Once! I know I should huhu. But I’ve seen Begin Again and if it’s similar (I’ve been told that they are?) I wouldn’t call it romance genre based on the movie I saw. If that were a book it would get backlash in the reviews, and there would be requests for it to be categorized as “Women’s Fiction” or “Contemporary Fiction” instead (if mostly male POV). A romance book written Woody Allen-film-style would get the same response I think.

But yes these will probably be categorized as Romance in other media. I suspect that their creators will often say in interviews that they’re “not just romance” though precisely because they’re getting some backlash for being bland romance. “Muted” romance I wouldn’t call romance at all; if I were into horror I’d think an author who specialized in “mildly scary” just wasn’t being edited by the right people. 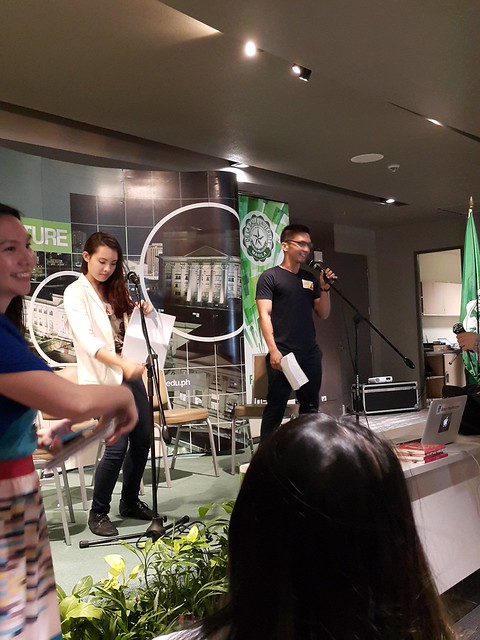 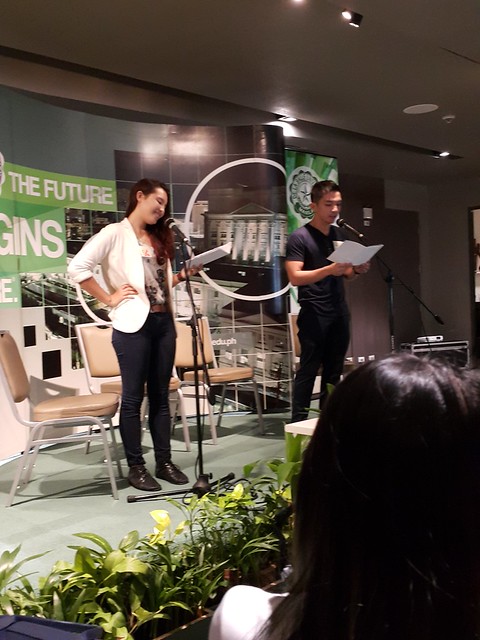 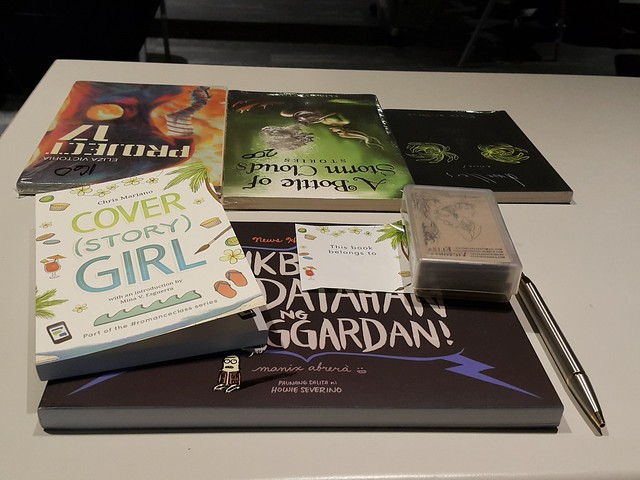 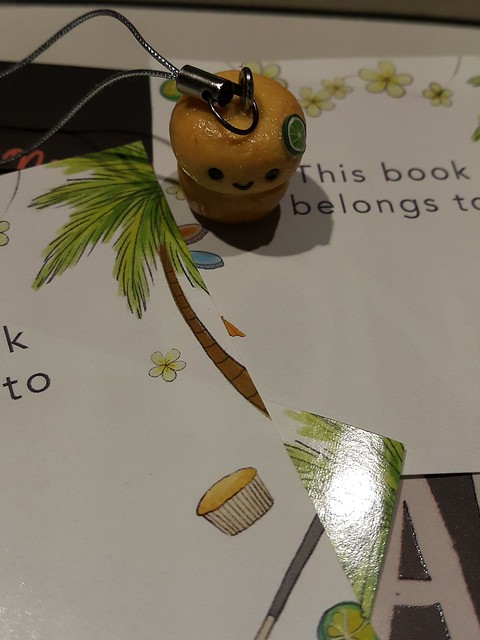 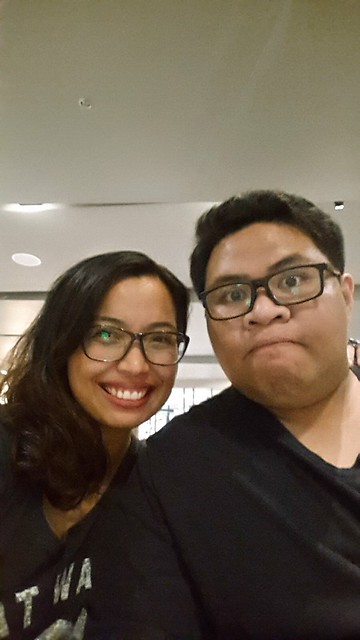 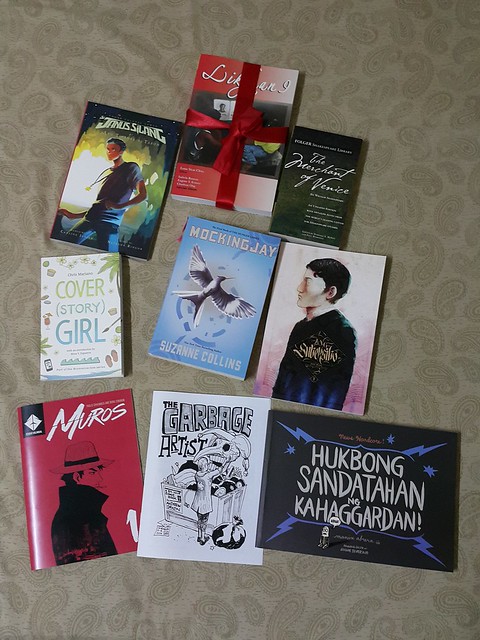 Congrats to Honey, Tina, Paolo, Mina and the rest of the ReaderCon committee! It gets bigger every year.