Why is it that when something bad happens, it’s always you three?

Please, Professor – we’ve been asking that question for six years. 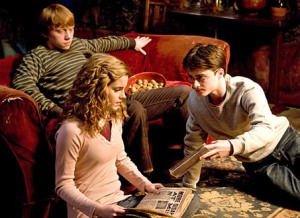 – Emma Watson (Hermione Granger) has the tendency to over-act; a bit annoying.

– Helena Bonham-Carter is always a delight to watch.

– Tom Felton should eat. A lot.

– My sister and I couldn’t help elbowing each other during that scene with Dumbledore and the blood on Harry’s forehead. “So gay.” “So gay.”

– I’m sorry, this Harry/Ginny thing isn’t working for me.

– So apparently all the potions ingested by the characters in this film have the singular effect of marijuana.

– A lot of characters cry but I hardly see any tears. Nice move, Felton, washing your face at the sink to mask this rather embarrassing fact.

– From disaster flick to rom-com to horror to reefer comedy to gasp, LOTR.

It didn’t explain anything at all about the “half-blood Prince” and I watched the film with almost no recollection of the book, but I liked it. I didn’t get lost, confused, or bored. The other films had scenes sticking out like a sore thumb (with the exception of Cuaron’s Azkaban, that one flowed like velvet, stylish and effective); this one didn’t. I enjoyed watching Jim Broadbent, who plays Horace, a character I unfortunately had completely forgotten. (Me to my sister, when the character appeared onscreen: “Who is this guy again?”)

My sister wanted more action. I shrugged.  The Potter films define “action” as a bunch of actors waving wands and grimacing. I’d rather have the comedy. And maybe the drama, if only the teenage actors can, you now, cry.