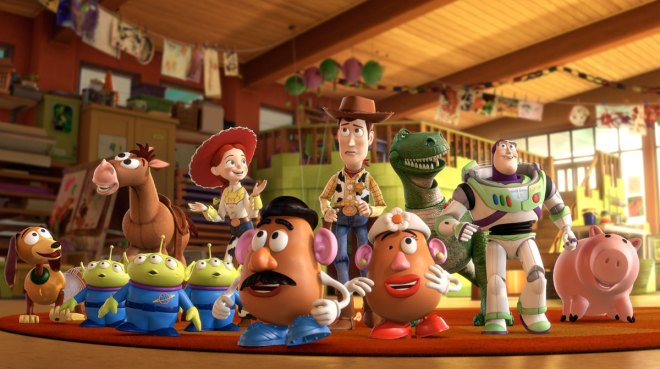 (First off, Spoiler Warning applies, but if you’ve seen the film, read on and let’s talk in the Comments section!)

Andy is now 17 and is packing up his stuff for college. The toys – Woody, Buzz, and co. – are losing hope: they have not been played with for several years, and now they are in danger of  ending up in the attic, or in a garbage bag to be thrown away.

I have always admired Pixar’s handling of drama and wonder in its animated films, but even then Toy Story 3 blew me away. As in the other two films, simple travels are blown into epic proportions: Woody’s travel from Andy’s to a house “just around the corner”, the toys fighting their way away from the curb to the garage, a tour of a daycare center, etc. The film evokes horror and film noir in some scenes, most notably in the flashback narration of clown toy, Chuckles (whose voice just killed me, killed me). I found two toys genuinely scary. I’ll give you three guesses.

There is an entire sequence that strongly reminded me of The Brave Little Toaster (a childhood favorite). How can a scene showing toys holding hands and readying themselves for a tragedy touch me so much? And yet it did.

Every Pixar film is an ode to childhood, but this one shows us a definitive goodbye to it. Andy’s mom enters his stripped room and starts to cry, and I wonder: did she feel like a toy discarded? Andy, in one of the final scenes, through a simple gesture, shows us how badly he wants to hold on to a more innocent time now slipping away. College looms large; one cannot possibly continue to pretend to destroy an evil pig with a space ranger and a cowboy.

Growing up is exciting, but oh, how painful it is.

This film is highly recommended.