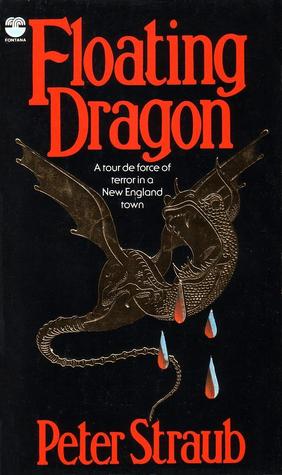 Floating Dragon could have knocked my socks off, but unfortunately the novel’s middle part got bogged down by too many abstractions, too much 80’s horror imagery – the pulsing red light, blood everywhere, visions in various stages of decomposition. Granted that it was written in the mid-80’s, but I’m reading this now in 2011, and it was just too much. Many times the horror becomes ridiculous, even cheesy, even laughable, far from the subtlety of his short story collection, Houses without Doors, for example.

But it starts and ends beautifully enough. The beginning reminded me of Straub’s The Hellfire Club (which, by the way, did knock my socks off), with its huge cast of characters, its Gothic feel, invented history, and invented pop culture legacy referenced throughout the story (the show Daddy’s Here in Floating Dragon, the novel Night Journey in Hellfire Club). The novel starts like a crime story: a woman named Stony Friedgood is found brutally murdered in the idyllic, middle-class town of Hampstead. But then the story gets a hint of scientific disaster: an experimental chemical called DRG is released accidentally into the air, and settles on the town. This chemical, when inhaled, either kills instantly, or turns the person insane. Did DRG just create a serial killer? All over Hampstead, birds fall dead from the sky.

Still, that’s not all: when the town of Hampstead was built in the 1800’s, a man named Gideon Winter arrives in town and brings with him a destructive force that will visit Hampstead time and time again.

It’s worth a read, if only for Peter Straub’s superb writing.

The Kobayashi Maru of Love