I was ready to give up on the X-Men movie franchise because the third film was bad (they killed practically everyone) and the first outing of X-Men: Origins (Wolverine) was horrible. But I don’t think I have ever seen a young Magneto and a young Professor X on the big screen, and friends are raving about this new film, so I gave it a try. I’m glad I did. It’s not flawless, but James McAvoy and Michael Fassbender give engrossing performances. They’re really good. The supporting cast is meh. I don’t get that tornado guy at all. Kevin Bacon is more jokey than villainy, and January Jones looks lovely but is bland, bland, bland! I’m not too familiar with Emma Frost, but isn’t she supposed to be seductive and powerful? January looks more angry than alluring. She doesn’t suck you in. It’s like they just turned Betty Draper into a diamond statue.

We we so excited.

It also saddens me that the only characters of color in the film either end up dead or with the bad guys. 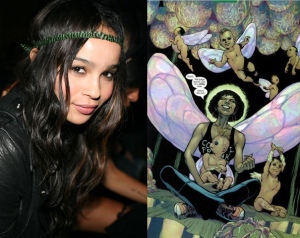 Is she really called Angel? Isn't there another X-Men named Angel? With angel wings?

"I knew I shouldn't have gone with these two white guys."

Now the question is: will they now continue with this new set of characters, or go back to the Origins series? So many origin stories! So many characters! This can be confusing.