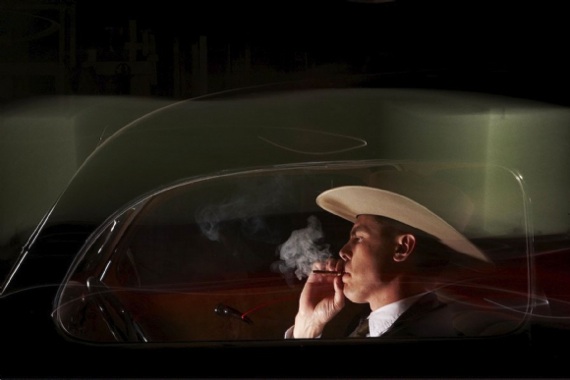 Casey Affleck plays Lou Ford, a deputy sheriff in a small West Texas town, whose latent sexual aggression and violence is awakened by a masochistic prostitute (Joyce, played by Jessica Alba). This awakening leads to Ford committing several murders, and to his eventual doom.

The first thing I heard about this film, which premiered in Sundance, is that it is an “example of Hollywood’s pornographic glorification of violence against women“. I have to say that I had to look elsewhere while Lou Ford pummeled Joyce to death onscreen, but the violence portrayed in The Killer Inside Me, in my opinion, pales in comparison to the acts shown in Irreversible, or Oldboy. Sometimes story necessitates an unflinching look at murder, and I get it.

Affleck gives such a wonderful performance as a baby-faced sociopath, so it’s a shame that the film didn’t give us much of a back story. There is subtlety, and there is not-enough-damn-information. The film, of course, is based on a novel by Jim Thompson. In an interview, Affleck said playing the character broke his heart, but he was talking about the character as portrayed in the book. In the film, Lou Ford is a fascinating character, but he did not break my heart, the way Robert Ford (in Jesse James) broke my heart. I did not root for him, or wish him dead. I didn’t really care, which is the worst you can feel for a character in any medium.