Project 17 reviewed on Rappler. My thanks to Gabriela Lee for taking the time to write about it.

MANILA, Philippines – Let’s face it: there’s not a lot of science fiction going around in Philippine literature.

It might be because, compared to neighboring countries or even the European Union and the United States, our scientific progress hasn’t really moved in the last 3 decades. Or perhaps, because of the lack of funding and opportunities, innovation and imagination don’t have a lot of space in the local scientific circles.

Or maybe it’s because we haven’t really tried — after all, people generally assume that science is hard, difficult and only smart people can understand science.

But in Eliza Victoria’s newest offering, “Project 17,” we are given a world in which the nitty-gritty lives of ordinary Filipinos are juxtaposed with a society where robots have taken over many of the service industries in Manila, including security, janitorial and even prostitution.

“Project 17″‘s Manila, specifically Hagonoy, Bulacan, is strangely familiar. [Ooh, one correction: Hagonoy is in the province of Bulacan in Central Luzon, which is not a part of Metro Manila. – EV] Everyone’s mobile phone is an extension of themselves, Twitter is still 140 characters in length and aggregates both social commentary and news tidbits, and massive pharmaceutical companies still control a large part of the population.

Of course, not everything is as it seems. Lillian is a babysitter, an outmoded role that is slowly being taken over by robots, and is trained in taking care of little children. However, when she is hired by a man named Paul to take care of his schizoaffective brother Caleb, Lillian discovers that beneath the gentrified facade of middle-class Manila that both men seem to project, there is a deeper, darker secret lurking beneath.

I envisioned this science fiction novel as a quick, easy read. It’s true: we don’t have a lot of sci fi stories locally, and we don’t have a lot of novels that are written to entertain. “[The] narrative [follows] the familiar beats of action-adventure films”, says the review; this description makes me happy.

If this makes you curious, order the book from Visprint! Shipping is free. Direct orders will be taken until October only. 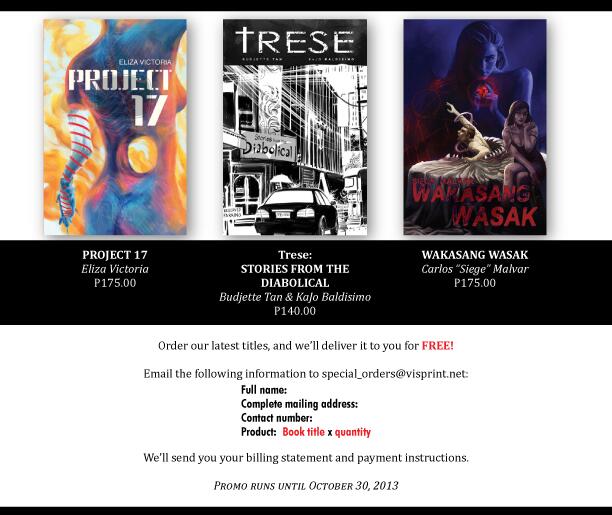 B Canapi also reviews Project 17 in his blog, Baliw na Baka, but it contains spoilers. Thank you for writing about it! Choice cuts, though:

Eliza Victoria has an engaging style of writing that hooks you from the first page onwards.  The book simply demands that you finish it in one sitting. It is entertaining and riveting, and Victoria manages to build up the world Lillian lives in without the use of too much exposition (A common pitfall too many writers fall for). Victoria is clear and concise with her vision of the semi-utopian Philippines the characters live in, and unlike most Sci-Fi works that seem to take it too far, this vision of the future is plausible and accessible, thus relatable.
…

PS: God, I can see this as a movie. Seriously.