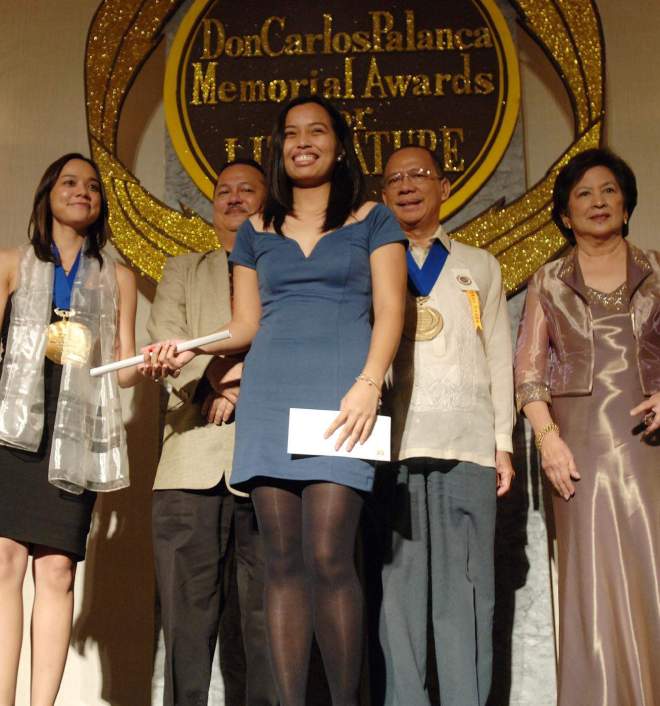 Grateful acknowledgment is due to the Mothership for carrying the story.

Here be Kate Pedroso’s longer, unedited version of the article, and then some. Click and read at your own risk. (Personally, I like this version better because hello quotes from my parents? And it was written with love? Echos.)

A collection of poems centering on the journalist as the “often tormented” author of many tragic narratives bagged top awards in this year’s Don Carlos Palanca Memorial Awards for Literature in ceremonies held on Tuesday night at the Peninsula Hotel Manila in Makati City.

“Reportage”, a poetry collection by 22-year-old Inquirer researcher Eliza A. Victoria, won second prize in Poetry-English division. Other winners in the category were “The Collapse of What Separates Us” by Vincenz Serrano and “Placelessness Poems from a Series” by Mark Anthony Cayanan, which won first and third prize, respectively.

“I just couldn’t believe it. I have never published a single poem before Reportage. Short stories, yes, but never a poem. So this is completely unexpected,” said Victoria, who was one of the 24 first-time winners in this year’s Palanca awards.

“I had the idea for the collection during my internship, and worked on the poems up until I finished school. I just thought it would be interesting – and necessary – to hear a news reporter speak in a series of poems,” she explained. Victoria graduated in 2007 from the University of the Philippines in Diliman with a degree in Journalism. She was an Inquirer scholar prior to joining the newspaper’s research team in August 2007.

“If one can look at the news reporter as the often tormented author or creator, and the news reports as his or her narratives, then you’ll have my collection,” she added.

“It’s a definite boost of confidence,” said Victoria of her award. “There was actually time when I got tired of revising and just wanted to leave this collection behind, leave poetry-writing behind, because I write fiction and I thought I was just messing with this other genre,” she added, laughing. “Receiving this award feels good. I feel sort of validated.”

Victoria’s short stories have appeared in the literary sections of the Philippines Free Press and the Philippine Graphic. Her fiction has been included in anthologies such as Very Short Stories for Harried Readers and Philippine Speculative Fiction IV, aside from online journals such as Cantaraville. One of her poems will be included in the US-based Houston Literary Review, which publishes poetry and fiction from novice and established writers. Another of her poems has also recently appeared on US-based online journal, Elimae.

“We’re absolutely proud of our choices this year,” said Ana Maria Katigbak, who chaired the three-person panel of judges for the category in this year’s awards. “We read hundreds of collections, and these three really stood out.”

The three collections bested more than a hundred entries to the Palanca category this year. “It’s a very young crop of winners,” said judge Mikael de Lara Co, noting that all the winners were only in their 20s.

“Some people say the Palanca awards is just about awarding the same people over and over, and yet when we came across ‘Reportage’, we really had no idea who it was,” Co added. “It’s a fresh voice, a fresh name, and we’re always happy to find new ones.”

Co described Victoria’s work as “affective.” “Of the three, she’s the one most in touch with the world outside,” he said.

Another Palanca judge, poet Conchitina Cruz, said Victoria’s collection was a “revelation.” “The winners all offered something new, something eye-opening, in the sense that they showed us new things that can be done with the form,” she said.

Victoria’s father Rodolfo said the foremost feeling was that of pride. “We’re so proud of her,” he said, adding that his daughter has always been an avid reader, even when she was younger.

“She’s always reading,” Victoria’s mother Belen chimed in. “Even when her surrounding’s a mess, nothing can tear her away from the book she’s reading.”

Victoria received the award alongside more than 50 other awardees at the Rigodon Ballroom of the Peninsula Hotel Manila, in a ceremony that featured poetry reading of the winning entries in the newest category, Poetry Written for Children (English and Filipino).

National Artist for Literature Bienvenido Lumbera, who received the award Gawad Dangal ng Lahi, was the event’s guest of honor and congratulated the awardees for receiving this honor that was “untainted by politics” in his speech.

“To those of you receiving awards tonight, you are fortunate,” said Lumbera in Filipino. “For the award you will receive has not been tainted by politics. It asks for nothing in return, other than for you to continue creating more,” he added, in reference to this year’s controversial National Artist Awards.

The Palanca Hall of Fame was established in 1995 and is presented to Palanca awardees who have achieved the distinction of winning five first prizes in the regular categories.

Established in 1950, the Awards aims to help develop Philippine literature by providing incentives for writers to craft their most outstanding literary work; to be a treasury of the Philippines’ literary gems from our gifted writers; and to assist in its dissemination to the public, especially the students.

Starting with the Short Story category in English and Filipino in 1950, the awards expanded through the years as it elicited growing response. It added the Poetry category in 1963.# – Kate Pedroso, INQUIRER Research