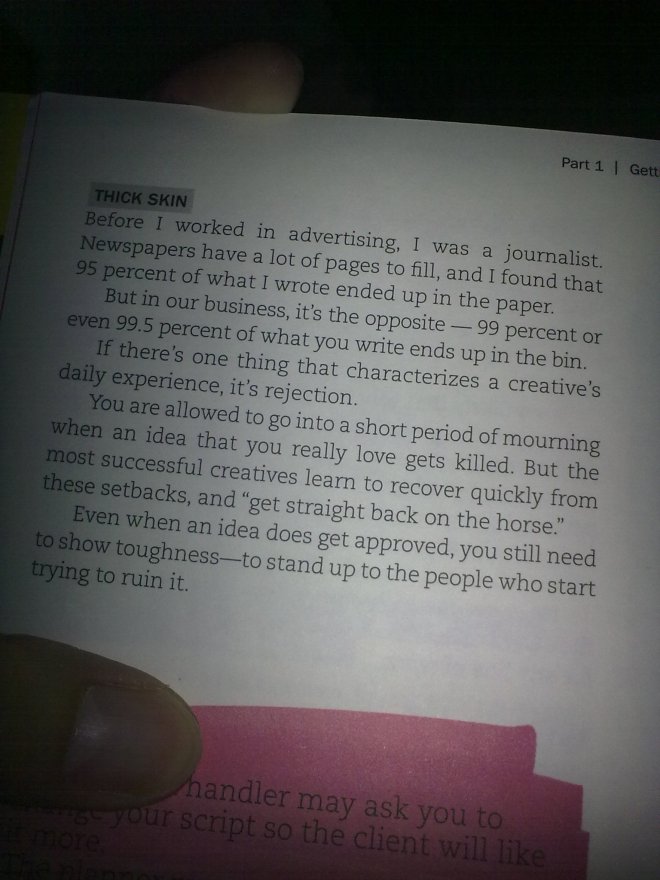 Before I worked in advertising, I was a journalist. Newspapers have a lot of pages to fill, and I found that 95 percent of what I wrote ended up in the paper.

But in our business, it’s the opposite – 99 percent or even 99.5 percent of what you write ends up in the bin.

If there’s one thing that characterizes a creative’s daily experience, it’s rejection.

– Simon Veksner, How To Make It As An Advertising Creative (2010)

After nearly four years, I’ve tendered my resignation from the paper, effective July 28. Tomorrow, July 19, is my last day at the office. After that, I’ll use my remaining leaves to meet with friends, spend time with my family, fill up forms, take care of requirements, and bum around before I start working again. August I start work as a copywriter at this advertising firm.

Why the shift? I knew, even before I graduated, that I didn’t want to become a beat reporter. I admire the men and women who do this every day. It’s fucking hard. I love interviewing people and writing news and feature stories, but I don’t have the stamina and the drive (above all, the drive) needed to make it as a reporter. (I think the huge uncertainty in my choice of profession, among other uncertainties, resulted in that series of poems – “Reportage” – that eventually won me an award haha.) As a Journalism major, I found this realization embarrassing, and it took me a while to admit this to myself. But when I finally did, I was relieved.

When the paper’s Research department announced an opening in 2007, I grabbed the opportunity, because it meant working in print media (and the country’s best daily broadsheet! I said it!) without the daily mental pain of doing something I don’t want to do (i.e. beat reporting).

I became complacent. Then I started thinking of career mobility. Where will I be five years from now, in this company? I saw myself in the same job, the same position, the same daily drill. I became restless. I found myself looking at job postings and asking friends for leads to other jobs, and that’s never a good sign.

I’ve been restless for almost a year. I think it’s just time to make the move.