Ilocos! This is one of my favorite trips. Relaxed (since we partitioned the tour into four days instead of our usual frantic two days) and involved equal parts culture and craziness.

We met up on March 23, Friday, at the McDonald’s near the Quezon Avenue MRT station. After dinner we took a cab to the Florida bus station in Sampaloc.

We booked a ride in a sleepers’ bus. This bus is a double-decker. Think bunk bed, not the double-decker buses of London. Fare is P780 and there is a trip at 10 p.m. every day to Vigan. We were told that we could only book two days prior to the departure date, but when a friend of mine bought tickets on Wednesday the lower deck had already been filled. Perhaps you can try dropping by the bus station the week before? The lower deck is more desirable because to get to the toilet you don’t have to practice your gymnastics.

It’s cold inside the bus so bring a jacket and a small blanket. Pillows too if you could manage to do so.

I’m a light sleeper so I wasn’t able to sleep much. We got off at Bantay at around 5 am and took a trike to get to Casa Teofila Lodge. The trike charged us P80.

Casa Teofila is cheap, and it showed of course. The heater in the bathroom didn’t work and the aircon, for some reason, had no dials, so when its timer shut it down some time in the afternoon we had to call personnel to turn it on again. But we’re fine with it. We just needed a place to sleep and keep our bags while we walked around Vigan.

After showering, we went out for breakfast at Kusina Felicitas in Grandpa’s Inn. Service was ridiculously slow because they seemed to be preparing for a catering service. I had tapa, coffee, and native chocolate. Try the chocolate! 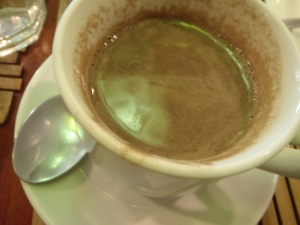 My beloved high school friends and travel mates. We’ve been friends for a decade!

June marking a map for our walking tour of Vigan.

On with the tour! I loved Vigan. Ancestral homes fascinate me. 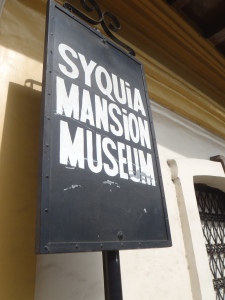 The Syquia Mansion is the ancestral home of Alicia Syquia, wife of Elpidio Quirino, the sixth President of the Philippines, the “poor boy from Ilocos” who married into a wealthy family. 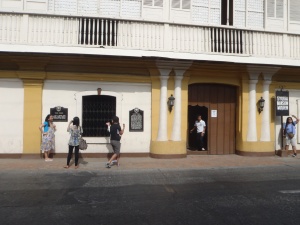 My friends camwhoring outside the mansion, and the tour guide opening the door and wondering who’s been ringing the doorbell so early in the morning.

I enjoyed this tour. The guide shared interesting trivia, like how to tell if the bed belonged to a married couple or an unmarried maiden by simply looking at the carvings (tip: it had something to do with carvings of the pineapple and pumpkin), how to tell if a painting is an original or a reproduction by looking at the signature (tip: a reproduction will have two signatures, one from the original artist, and another from the artist who painted the replica – the position of the signatures can tell you which is which), and various stories about the members of the family.

Alicia did not survive the Second World War, and so when Elpidio became President, his daughter, the lovely Victoria, became First Lady. 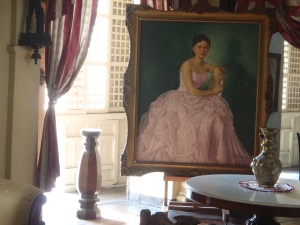 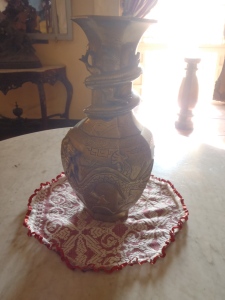 Mirrors, like this one, are expensive, and serve as status symbols. If you break a mirror, you’ll have to serve the family for seven years – the source of the superstition about “seven years’ bad luck”.

If you only have time to visit one museum in Vigan, visit this one.

Next: Crisologo Museum and the Burgos Museum. The Syquia Mansion is a tough act to follow, so all the other museums were just okay for me.

Flor Crisologo, a congressman, worked toward the establishment of the Social Security System. He was assassinated inside the Vigan Cathedral in 1970. The case remains unsolved to this day.

Ghia and Grace Anne discovers Gil Puyat, before he became known as an avenue in Makati.

The Burgos Museum employs college interns as tour guides. They simply read whatever’s written on the wall, so this tour bored me out of my mind. They do have interesting displays though, like this Noli.

St. Paul’s Cathedral, and then lunch at Plaza Maestro. 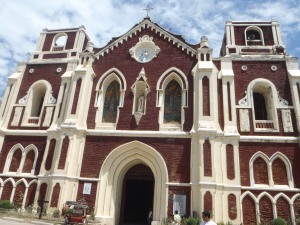 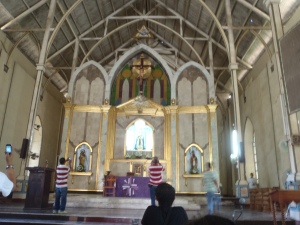 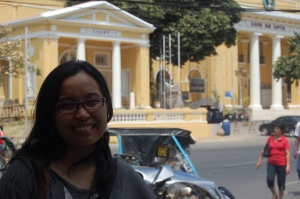 It was a hot day. We were soaked with sweat and my armpits smelled like a homeless person. Recharging with fast food aircon and coffee.

Windy! And slightly scary to climb.

Pagburnayan Jar Making! I’ve never tried pottery-making before, so this was fun! 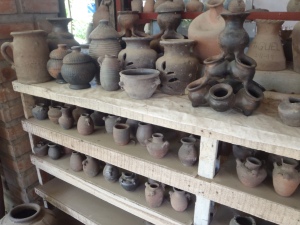 My eyes were smarting from the sand, hence the shades. 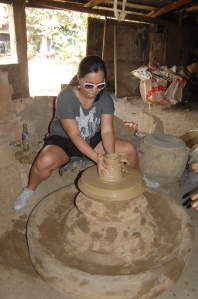 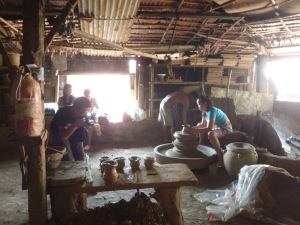 Hidden Garden for merienda. We tried their empanada, ukoy, and Vigan-style Halo-Halo.

I don’t know how this differs from your regular halo-halo, but it was delicious.

Last stop, Baluarte ni Chavit. They have an albino peacock, which I unfortunately couldn’t photograph because of the bars.

We were standing by the Baluarte sign when we got sprayed with water. My first thoughts: 1) saliva? 2) ELEPHANT?

It turned out to be a lawn sprayer on timer.

A peacock! So pretty.

My first time to see a tiger up close. Shame they didn’t have a lion.

I was so ready to take a bath after the tour.

Wherein I tasted bagnet for the very first time.

How sumptuous to have dinner in a restaurant named after a poetess.

We walked down Calle Crisologo, which looks brilliant at night.