Halloween is over, but I just want to tell you about these two films that I enjoyed.

I have a hard time finding a horror film that truly gets under my skin (recent disappointments: Mama, Sinister, The Conjuring), so when I do see one that impresses me, I just have to share.

I can’t recall the title, but there’s this ghost hunting show on cable that annoys me to no end. It’s hosted by this eager guy who looks like a gym trainer and sounds and acts like a douche, surrounded by similar annoying douches. Ninety percent of the episodes comprises of shots of the crew in front of the camera practically begging for a paranormal experience. “Do something! Anything! Cut my nose off!” In one episode, something does happen. A cameraman sits in a dark room and something falls in the background. There is no wind. There is no one there. There is no other explanation. The host and the cameraman react to this supposed paranormal encounter by high-fiving each other like drunk guys in a party, chest-bumping and shouting “Yeah! That’s what I’m talking about!”

I saw maybe three episodes of this and gave up in disgust. It’s like watching a – you know that scene in Ang Babae sa Septic Tank? When the young filmmakers find their shooting venue? They stand on a mountain of garbage and start whooping, celebrating, excited about the awards they will surely receive for the film. For the people living in the slums, this is their life. For the filmmakers, it’s a ticket to international fame.

I’m sure these ghost hunting shows informed the creation of Grave Encounters, which one can also view as a parody. A group of filmmakers, excited to catch a ghost on camera for their show’s Episode 6, locks themselves up for eight hours in an abandoned asylum. Something happens, of course. Things quickly escalate. It features a primal fear, of being locked in a place alone (a place that is possibly alive), which makes it highly effective.

(The host of the show is also a douche, so this is also highly cathartic.) 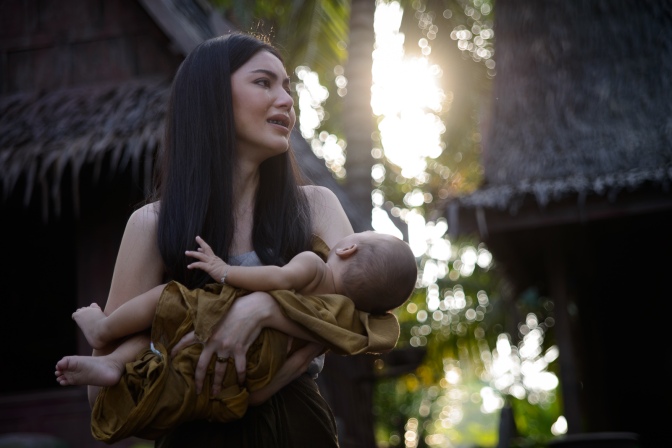 I am wary of horror films mixed with comedy. Very rarely, it works. It works here, to an extent. Pee Mak comes home from the war with his friends and finds his wife and newborn son at home. But the people of the village are acting strangely. They won’t sell food to him. They all seem scared of his wife. When his wife sings his son a lullaby, the neighbors cover their ears.

It’s funny, but when horror kicks in you see that there is real danger for the characters involved. You stop laughing then.

But: It trips in the final act. The concluding scene is too long, the decision makes no sense, and the film is rendered silly. The ride is fun, but the ending is a let-down.

It delivers good laughs though, so it’s not  a disappointing watch. It’s better than most comedy films out there.