I’m thankful for this year, despite the storms, the world’s tragedies, the bone-weariness caused by city living.

On Nov. 22, we attended the Philippine Speculative Fiction Vol. 9 Launch Party and the National Book Awards.

The PSF launch was held at Shangri-La CBTL, hosted by Dean Francis Alfar. Here’s J pretending to be someone else. 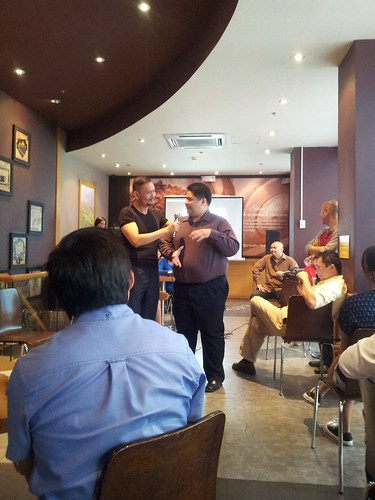 Flashback! An hour before that we bumped into fellow writers, beauties Elyss and Tin, and sat down for lunch at Duck & Buvette. 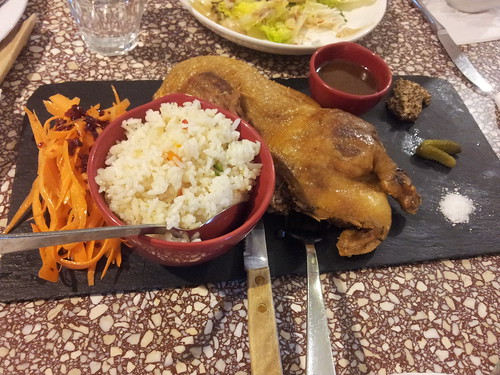 I really loved their food. 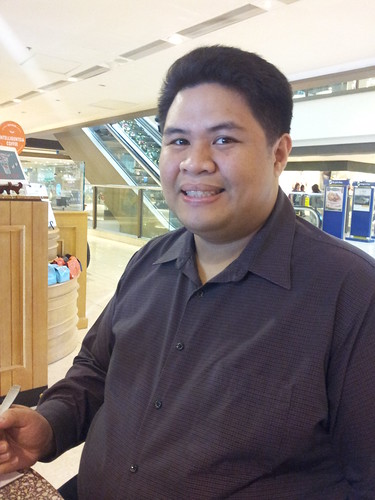 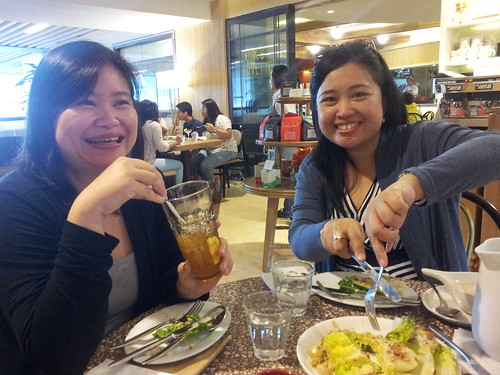 So right after the launch we had to run to the Marble Hall of the National Museum for the National Book Awards. 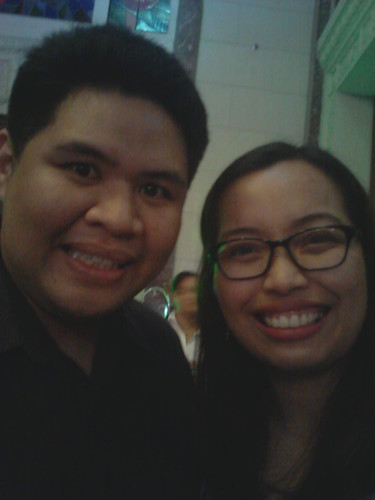 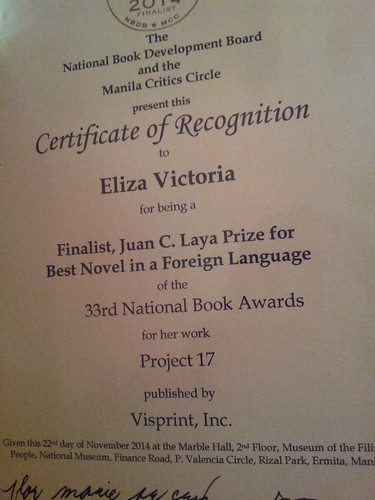 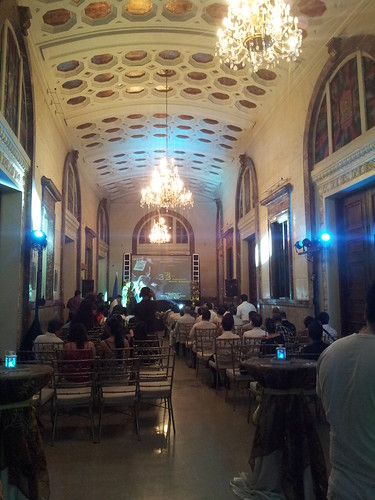 My book on display. 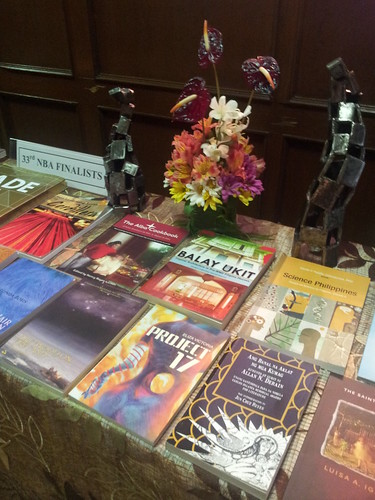 While I was in Batanes, J won a Netrunner Tourney! 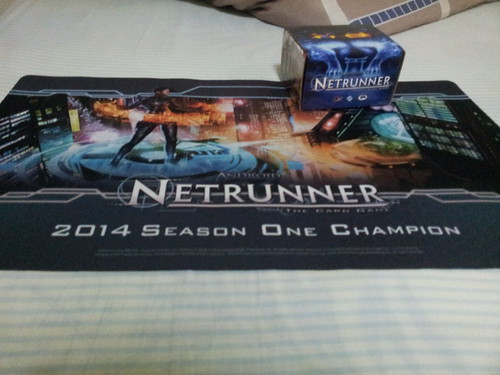 And here I am with people from work, enjoying our Christmas dinner.

And some acceptances that will see the light of day next year.

You want to buy that ebook online, but you don’t have a credit card or PayPal account.

No problem. You can pay for an ebook card in cash and download the ebook on your device by using the access code listed in the card. Simple and easy. These cards will be on sale TOMORROW at 2 pm at the launch of Philippine Speculative Fiction Vol. 9. I have a story in it!

So we’ve been trying out this new ‘model’ (if I may call it that) — selling ebooks via ebook cards. Here’s how they work: instead of paying via credit card, PayPal, etc, you can pay us in cash for the title you want, and we give you a corresponding card. Then, when you get home, you log in to your Flipreadsaccount (or make one if you don’t have one yet), go to the URL indicated on the card, enter the access code (also listed on the card), and voila! You may now download the ebook! (Yeah, I really want this to catch on, particularly since not a huge percentage of Filipinos have credit cards.)

While I’m at it, join us for the official book launch of Philippine Speculative Fiction Volume 9 tomorrow at CBTL, Shangri-La, 2-4pm! We’ll have ebook cards for ALL volumes of PSF available for sale, though only in limited numbers!

After that, I will be hurrying to the National Museum for the 33rd National Book Awards. I will be attending with my publisher Visprint as a finalist. The winners have been announced early on. I see some friends on the list — congratulations!

Busy Saturday. I hope we get good weather.

The ninth volume of the Philippine Speculative Fiction series is now available! Look at that gorgeous cover. This anthology includes my story, “Deliver Us”. Please grab a copy!

A young tikbalang auditions at the country’s largest TV station; a priest travels the universe to officiate sacraments in outer space; a murdered girl returns unscathed to the home of her perpetrators. The Philippine Speculative Fiction series showcases the rich variety of Philippine literature. Between these covers you will find magic realism next to science fiction, traditional fantasy beside slipstream, and imaginary worlds rubbing shoulders with alternate Philippine history—demonstrating that the literature of the fantastic is alive and well in the Philippines.

Stories from this series have been included in the Honorable Mentions list from The Year’s Best Fantasy and Horror edited by Ellen Datlow, Kelly Link, and Gavin Grant.

I’m going to have a horror story called “Deliver Us” in the upcoming volume of Philippine Speculative Fiction, edited by Andrew Drilon and Charles Tan.

And here’s the TOC!

Blood of Iron by Christian Renz Torres
Panopticon by Victor Ocampo
A Cha-cha with Insanity by Vida Cruz
Only Dogs Piss Here by Michael Aaron Gomez
Last Race by Jenny Ortuoste
Oscar’s Marvelous Transformation by Kat Del Rosario
Stations of the Apostate by Alexander M. Osias
Sikat by William Robert Yasi
Deliver Us by Eliza Victoria
Miracles under a Concrete Sky by Franz Johann Dela Merced
The Unmaking of the Cuadro Amoroso by Kate Osias
The Woodsman by Cedric Tan
And These were the Names of the Vanished by Rochita Loenen-Ruiz
Anthropomorpha by Crystal Koo
Sofia by Marianne Villanueva
Transcripts from the Investigation on the Life and Death of Alastor de Roja by Vincent Michael Simbulan
TG2416 from Mars by Nikki Alfar
Mater Dolorosa by Marc Gregory Yu
Scissor Tongue by Elyss Punsalan
Cogito by AJ Elicaño

1) Project 17 is featured in the December issue of SPEED Magazine! http://bit.ly/1jNUQnd

2) I will also have a column article in Speed Mag’s upcoming January 2014 issue. Something about robots. Watch out for it!

3) This photo from a friend, where my book sits beside Enrile’s inside Fully Booked’s Greenbelt branch.

4) This wonderful news: I will have a horror story called “Deliver Us” in Philippine Speculative Fiction vol 9! Can’t wait to share it with readers. :) PSF 9 is edited by Charles Tan and Andrew Drilon.

Here are the (unedited) opening paragraphs. I hope this excerpt will intrigue you enough to drop by the launch next year. Cheers!