It began to rain, so instead of going out, we just had Amici (gelato cakes!!!) delivered for dinner. We watched some episodes of Top Chef Canada while eating.

Jaykie had class on Saturday, so he went to UP, and I went to Trinoma to shop for gifts for my parents (my mother’s birthday is on the 25th, my father’s in July). This despite the fact that I woke up suddenly at 5 am, broke out in sweats, and felt as though I were falling. Vertigo once more, with feelings. I popped a Serc (24 mg.) and hoped this would pass soon and not come back to bother me again.

I wanted to buy a bag for myself, but couldn’t find anything that I liked, so I ended up buying costume jewelry.

I know I have way too many rings, but I’m on the lookout for more plastic rings. And that TV necklace was just cute. (I’m wearing it today at work, and I broke one of the antennas. :( But it’s still cute. I’ll just cover the broken antenna nub with my hair.)

We had late lunch at Mango Tree Bistro. It’s our second time at this Thai restaurant. We love their food. 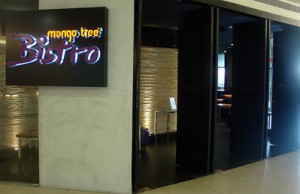 We had honey-glazed pork ribs, rice with vegetables, and of course –

Just writing about it is making me crave for it. So delicious.

We got home before the rain fell. And how it fell. I was amazed it didn’t flood the streets. Early dinner was a tuna sandwich. Jaykie made the tuna spread (mayo + celery + apples = delicious). Later, when we got hungry again, I poured us some cereal and cold milk.

We finished Damages Season 2 and watched Burn Notice: The Fall of Sam Axe, a TV movie that is basically an extended episode of Burn Notice with Sam Axe and a pinch of Michael Westen. It’s hilarious.

Jaykie’s little walk-in closet’s roof was leaking, so we left a plastic bucket there overnight. Look how much water we got.

This morning we woke up and Jaykie said he wished he could just stay under the sheets and read. I’d love that too, but alas, work.

Happy Father’s Day to my Tatay! :D I’m coming home next week with the gifts. I hope it doesn’t rain.

One thought on “twenty months”