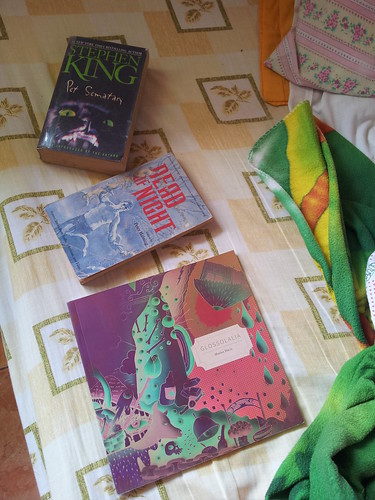 – Read a bunch of stories from Ellen Datlow’s Best Horror of the Year series. (I was in a very horror kind of mood.)

– Watched all 13 episodes of Hataraku Maou-Sama (The Devil Is A Part-Timer). The Dark Lord of Ente Isla and his demon general Alsiel flee an attack by using a portal between worlds. They end up in modern Japan, where there is no magic and everything is expensive. The Dark Lord is forced to work part-time at a fast-food restaurant, while Alsiel stays in their rented apartment, figuring out how to get them back to Ente Isla, do housework, and make sure they’re living within budget.

It’s as crazy, charming, and funny as that summary. I loved it to bits.

– Did an interview with Philippine Star SUPREME about creepypasta, NoSleep, and online storytelling. [Read: “The new weird” by Don Jaucian] 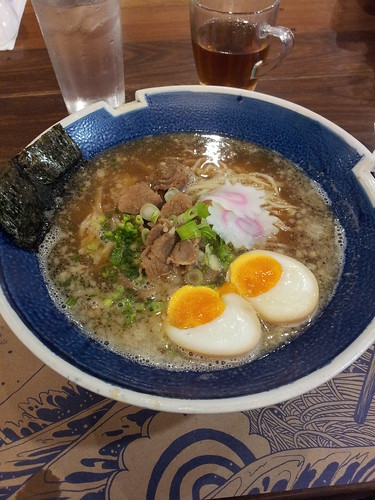 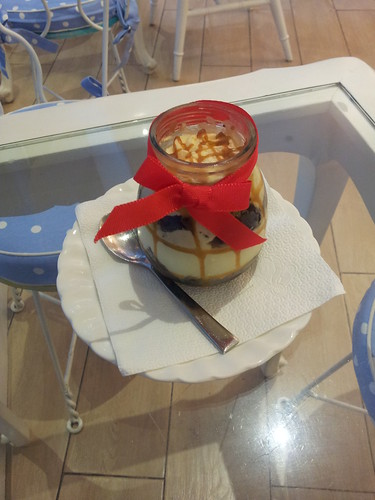 – Received cake, a black balloon, and a bag of treats from my lovely colleagues. 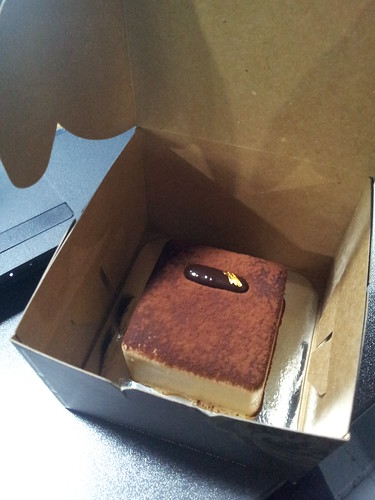 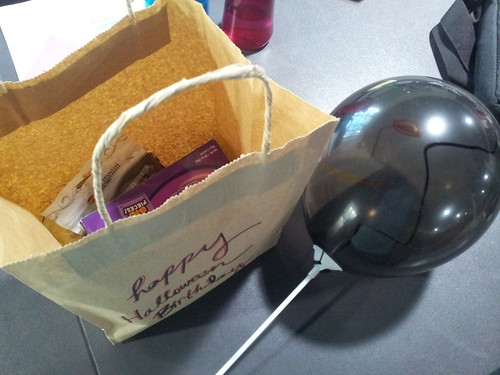 – Received cake from my siblings. 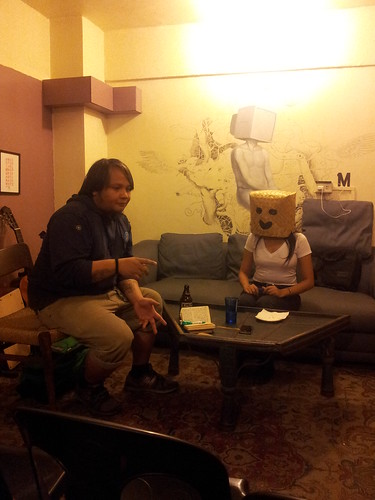 – Bought a new copy of elsewhere held and lingered and had it signed by the author. Happiness. 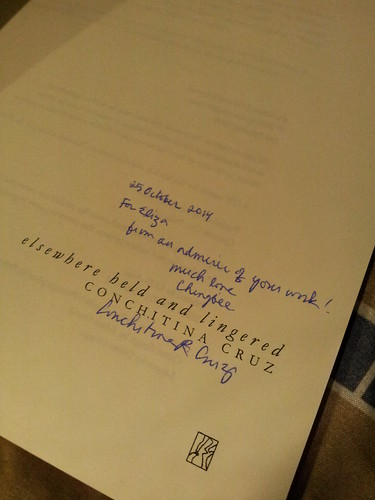 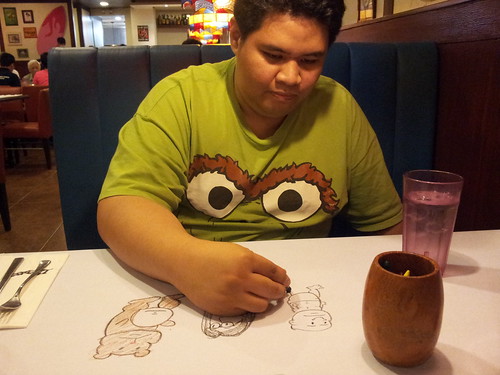 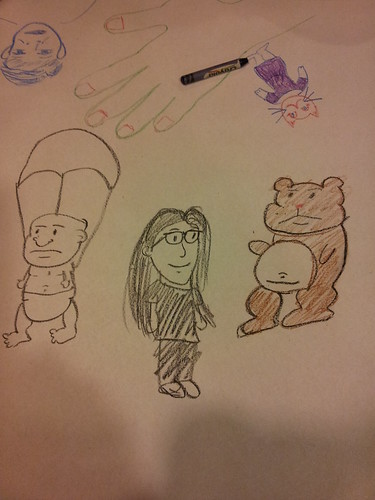 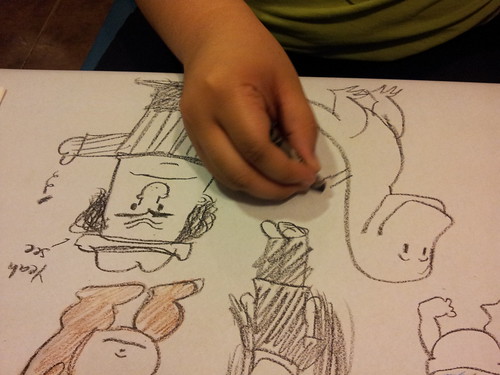 America is in the throes of economic collapse. Bush is introducing the bailout, and McCain and Obama are advocating change in the next presidential election. Even the mobsters are feeling the recession. Jackie (Brad Pitt) wants to fly in a hitman, but he has to fly coach. The “recession price” for killing a person has gone down to 10 grand a pop. This film, written and directed by Andrew Dominik (Assassination of Jesse James by the Coward Robert Ford) has the saddest hitmen I know. Storytelling is tight and the visuals are realistic. This is not your flashy shoot-em-up, but the dialogues – funny and cynical – will reel you in.

I’ve seen this film a while ago but never got the chance to write down my thoughts. It’s a great film, and you should see it. Tarantino is definitely getting better. We can talk about racism and slavery in a cerebral way, but this film says fuck you to that. It forces you to look and dwell in the fantasy (like the fantasy of Hitler dying in Inglorious Basterds); it’s like a punch in the gut.

TV: Happy Endings is a light, fun watch. (Dramaaaa! I see the show on TV but only recently got the chance to watch the first two episodes in full.) Raising Hope is still sweet and sadly still underrated. Watch it, people! House of Lies with Don Cheadle is okay, but I’m not sure if I’ll watch Episode 2 onwards. The first episode of Vikings starts strangely (cliche scenes, dialogue that’s not appropriate to the time period) but gets interesting. Might follow that.

What have you been watching?

Girls and Girls creator Lena Dunham (who only has one indie film to her name prior to the show) have haters. Serious haters, and I’ve read the criticisms and the hate before I plunged into the first episode. I was predisposed to hate it, but I watched it one boring Sunday after doing all the housework and it turned out to be a fun, worthwhile entertainment. It’s amusing, entertaining, absorbing, and cringe-worthy – like the gossip you hear from the other females in the washroom while peeing or fixing your hair. You’ve done it, you know what I mean. You listen to the story, silently judge the people involved (“Nabasa mo na ba yung Fifty Shades? Ang daming sex pero nakakakilig siyaaaa”), but you can’t help it – you keep on listening.

The show’s not for everyone, something that will be clear to you in the very first episode. (J. watched the Pilot and hated it.) I’d be reluctant to recommend this to my own sister. I have to admit that the issue of over-privilege does get under my skin. What semi-saves it for me is the fact that the other characters are at least aware of Hannah’s self-centeredness. (“You’re 11 pounds overweight, and you think that’s struggle?…You don’t know what real struggle is!”) If you want something more Sex And The City-like, something glamorous and pretty to look at, look away.

PS This is a good essay about the show.

I received some pahabol Christmas gifts from Visprint last week. Surprised and touched. I love this notebook.

Ah, the apartment. It’s an endless work-in-progress. I should stay away from groceries. Got these cute laundry baskets from Rustan’s Shopwise.

The curtains are from his ma. It fit the earth-toned motif we accidentally got going on.

And new hair! Of course. My hair was so thick and heavy I decided to have most of them chopped off. Became a mascot for the salon’s Permanent Blowdry service. (“Look at her hair! Ang ganda di ba?”) It was entertaining and weird.

I gave J a link to some easy marinades, and he found one that made the chicken taste…expensive. Haha!

The recipe is here. Have fun!

Around midnight we had a McDonald’s craving, but the Globe signal was so bad in our place that the operator couldn’t hear our orders.

So, good job, Globe. You just saved our arteries.

PS Watch Archer! It’s been described as Arrested Development meets James Bond. Some familiar AD voices there. (And Jessica Walter voices a character that looks like Lucille Bluth – just look at the photo.) It’s irreverent, and hilarious as hell.

Came home this weekend for my father’s birthday.

I can’t do any writing when I’m at home (too lazy? too comfy?), so I just spend the time on my back watching whatever show’s available, or reading. I recommend:

“These are the goths”

“I don’t know what these are.”

The smart nerd and the cool jock from high school end up in the police academy and become best friends. After an arrest gone wrong, they are transferred to 21 Jump Street, where they are assigned to do undercover work as high school students. Based on the series starring Johnny Depp. I don’t know how this film adaptation compares to the series, but this wins plus points for me for all the action film meta-jokes and the film’s acute awareness that the high school of ten years ago is very much different from the high school of today.

Curtis lives with his wife and hearing impaired daughter in the Ohio countryside frequented by storms and tornadoes. He starts having nightmares about rain that looks like motor oil, birds flying in strange formations, and his dog and neighbors attacking him and his child. The nightmares start bleeding into his days. He has a history of mental illness, so fearing he is developing schizophrenia, he reads books, sees his mother, and talks to a counselor at the free clinic. But he also takes out a risky loan and starts repairing their tornado shelter, to the anguish of his wife. Is Curtis insane, or a prophet of dire days to come? This film is highly recommended. (And Michael Shannon and Jessica Chastain should have received Oscar nominations for this! What the hell?)

This is a rewatch. If you haven’t seen it – what is the matter with you? This is one beautiful story that stands the test of time. It’s still as good as ever.

Contains four short novels, three of which were adapted into films (Shawshank Redemption, Apt Pupil, Stand by Me). All four stories are absorbing reads.

ALL OF THE BATMAN

I am particularly interested in the Dick Grayson storyline within the Batman universe. My only exposure to the first Robin is through the films (all meh) and the brilliant animated shows Batman: The Animated Series and The New Adventures of Batman and Robin. Recos? I already have Robin: Year One, but I have read Long Halloween, Dark Victory, The Dark Knight Returns (Frank Miller! Brilliant!), and a bit of the All-Star Batman and Robin series. (Frank Miller! What the fuck is this shit?)

Went back to the metro on Sunday and played with J’s cute nephew.

Carrie Mathison (Claire Danes) is an analyst of the CIA who is informed by an asset that an American POW has been turned by al-Qaeda. Ten months later, Carrie learns in an emergency meeting that a US Marine Sergeant named Nicholas Brody (Damian Lewis), declared missing in action in 2003, has been rescued in a raid. While the CIA and the rest of the country tout Brody a war hero, Carrie sets up an unauthorized surveillance system in the Marine’s home, wiretapping his phones and observing his life, believing Brody is a terrorist on American soil.

It becomes complicated, with Carrie’s assets and informants and false leads, and her mood disorder which can make you question her credibility. Throw in a good mix of domestic drama and infidelity and you end up with a confusing web of lies. Is he or isn’t he? But you realize the plot is actually simple, once you go through the episodes and filter the truth from the lie, once you find out the horrible act that set all of these events in motion.

In Awake, police detective Michael Britten (Jason Isaacs) survives a car crash. In the car with him were his wife, Hannah, and his son, Rex. After the accident, Britten realizes that he is now living in two parallel worlds. In one reality, his wife Hannah survived the crash, but Rex is dead. He goes to sleep, and he wakes up in another reality, where Hannah is dead, but Rex is still alive. To help him “remember”, he wears a red rubber band when he is with his wife (and consequently the scenes in this reality have summer colors: warm reds and yellows) and a green rubber band when he is with Rex (the scenes here have cool colors: blue and green, like they’re underwater). In both realities, he is seeing a psychiatrist; in both realities, he is solving a crime. Britten still cannot tell which world is real, especially when certain details start to cross over from one parallel world to the other.